Who We Are > Expert Oversight > George F. Koob 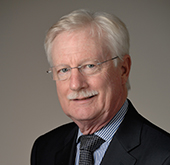 Dr. George Koob is Director of the National Institute on Alcohol Abuse and Alcoholism (NIAAA), a role he’s held since 2014. As NIAAA Director, Dr. Koob oversees a wide range of alcohol-related research, including genetics, neuroscience, epidemiology, prevention, and treatment.

Dr. Koob has published more than 650 peer-reviewed papers and several books, including the Neurobiology of Addiction, a comprehensive treatise on emerging research in the field, and a textbook for upper-division undergraduates and graduate students called Drugs, Addiction, and the Brain. He has mentored 11 PhD students and more than 75 postdoctoral Fellows.

Dr. Koob received his PhD in Behavioral Physiology from Johns Hopkins University in 1972. He spent much of his early career at the Scripps Research Institute as the Director of the Alcohol Research Center, and as Professor and Chair of the Scripps Committee on the Neurobiology of Addictive Disorders. He has also served as a researcher in the Department of Neurophysiology at the Walter Reed Army Institute of Research, and at the Arthur Vining Davis Center for Behavioral Neurobiology at the Salk Institute for Biological Studies.